to enlarge images
Target Grades: 5-9
Time Required: 30-60 minutes
Subject Areas: Chemistry
Activity Type: Kitchen Experiment
Standards: NGSS DCI PS1-A, MS-PS1-1, HS-PS1-3
{"input":{"width":490,"photo":"sharemylesson","row":"4970","table":"DOCUMENT"}}
If you’ve ever tried to make salad dressing from scratch, you know that one of the biggest challenges is getting the oil and the vinegar to mix properly. No matter how hard you try to shake, stir, or whisk oil and vinegar together, they eventually separate. This happens because vinegar and oil are made of very different types of molecules that are attracted to their own kind.
{"input":{"width":"200","photo":"watermolecule","row":"4970","table":"DOCUMENT"}}
Most vinegars are solutions of acetic acid and water (plus some other acids and alcohols, depending on the type of vinegar you are using). Water, acetic acid, and alcohol are all examples of polar molecules—molecules that have a slightly negative charge at one end, or pole, and a slightly positive charge at another end. These slightly charged poles arise because one or more atoms in the molecule are electronegative, meaning that they tug electrons—which are negatively charged—towards them, creating an uneven distribution of charge within the molecule. Polar molecules are generally attracted to other polar molecules because their slightly negative poles have an affinity for their slightly positive poles. Polar molecules are attracted to water molecules—which are also polar—and are called hydrophilic, which means “water loving.”
Oils are a different story. Oils are a type of fat (like butter, shortening, and lard) and are considered non-polar. Fats and oils are composed primarily of long molecules called fatty acids (usually bound together by glycerol molecules into groups of three called triglycerides). Most of the atoms in a fatty acid molecule share electrons evenly and are neither negatively nor positively charged (although fatty acids do contain small regions of polarity—just not enough to make the whole molecule polar.) Non-polar molecules love other non-polar molecules and will glom together when mixed with water. You can observe this phenomenon by placing a few drops of oil on the surface of a bowl of water—eventually the drops will form a single large oil slick. Oils repel polar molecules such as those found in vinegar. Because oils also repel water, they are called hydrophobic, which means “water-fearing.”
{"input":{"width":490,"photo":"fattyacidmolecule","row":"4970","table":"DOCUMENT"}}
How can we bring together polar and non-polar molecules to make something delicious like mayonnaise (which is essentially a combination of water and oil) or salad dressing? We need an emulsifier. Emulsifiers are the hand-holders of the molecule world. They contain both hydrophobic and hydrophilic regions and are able to attract and “hold hands” with polar and non-polar molecules simultaneously, pulling them together to form a special type of mixture called an emulsion. For instance, after adding an effective emulsifier to oil and vinegar and mixing thoroughly, separation of the oil from the vinegar will take much longer or won’t happen at all.
In this experiment, you will test a few common household ingredients to see which is the most effective emulsifier for making salad dressing—and you can eat your results!
Salad Dressing Science Experiment
{"input":{"width":490,"photo":"materials","row":"4970","table":"DOCUMENT"}}
Materials
Vegetable or olive oil
Vinegar
At least three of the following emulsifiers:
Honey
Dry mustard
Garlic paste
Tomato paste
Stopwatch or clock (preferrably both)
Tablespoon and ¼ teaspoon measure
Whisk, spoon, or other stirring implement
Emulsifier data sheet
Four small glasses, bowls, or jars with clear sides—one for a control, and one for each emulsifier to be tested
Safety notes: While the materials used in this activity are used in home kitchens every day, please be aware of the following:
Lab tips: For classes, it may be helpful to designate a measuring spoon to each of the emulsifiers or pre-measure individual allotments for each student/group. You may wish to modify this procedure with volumes that are appropriate for the lab equipment you use. Print out the lab protocol and materials list for use in a lab with test tubes, pipettes, and a scale.
Kitchen Protocol
Analysis Questions
Related Links
Listen to our interview with culinary scientist Ali Bouzari (excerpt below) to hear how food science can help you make your favorite condiments, then read his SciFri article "Secrets of the Sauce" to learn more about the science of edible liquids. You can also print the article for classroom use.
Watch this video of a chef using food science to help craft a new version of a classic emulsion: hollandaise sauce.
Deepen your understanding of polar molecules by trying this interactive from PhET Interactive Simulations. 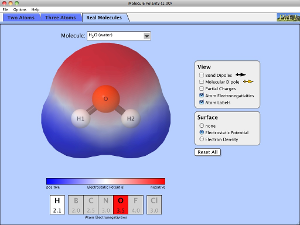 (requires updated Java plugin)
Standards
NGSS DCI PS1-A: Each pure substance has characteristic physical and chemical properties (for any bulk quantity under given conditions) that can be used to identify it.
NGSS MS-PS1-1: Develop models to describe the atomic composition of simple molecules and extended structures
NGSS HS-PS1-3: Plan and conduct an investigation to gather evidence to compare the structure of substances at the bulk scale to infer the strength of electrical forces between particles

Ariel is Science Friday's education manager. She is a former teacher and scientist who spends her free time making food, watching arthropods, and being outside. You can follow her @arieloquent

The views expressed are those of the author and are not necessarily those of Science Friday.

This Valentine's Day, Say 'I Love You' With Science

The Physics of Spider-Man: The Death of Gwen Stacy

The Chemistry of Waterproof Mascara

About the Science Club

Science Diction: The Origin Of 'Physician'

Write Your Name in Binary Code

Australia: Where Even the Seashells Can Kill You

The True Story Behind ‘Spare Parts’